Just as English housing styles were changing from the late medieval Tudor to Classically inspired Renaissance designs, the first wave of Pilgrims and Puritans came to New England and began building houses with which they were familiar.

These earliest structures show much medieval influence; steep roofs; unpainted clapboard or shingle walls; little applied decoration and a massive chimney. During the 18th century, the new Renaissance style, here known as Georgian, began to be seen in urban areas and in homes of the wealthy, but medieval building practices continued in rural areas and in modest dwellings right up to the Revolutionary War.

The medieval legacy is one of organic building, natural materials locally found, and design determined by need rather than by principles of style. Unpainted wood predominates; most paint, plaster and masonry belongs to 18th century work. Because these houses were simple, small and crude, very few remain, and most of these have been restored and preserved as historic sites. The most humble are of one room with a fireplace and chimney at one end. More frequent is the two room plan with the chimney centered behind the entrance and three-run stair leading to a loft or second story sleeping rooms. Massive fireplaces face into the first floor rooms. If means allow, a room, or rooms, may later be added across the back and the rear roof extended to create the familiar “salt-box” look.

This new back room usually became the kitchen, and a fireplace and flue were added to the center chimney. Even in the earliest days, the one room plan, the two room (Cape Cod), lean-to or “salt-box” and full two story plans were known because all had been developed in England earlier, but many years were to pass before all these forms appeared in New England.

What all these forms have in common is the heavy oak frame which supports the house. Hand-hewn logs of 8 to 12 inches square were used for posts and beams. These interlocked at joints and were secured with pegs. Walls were infilled with wattle (sticks and twigs) and daub (mud and clay) and sheathed with clapboards or shingles to protect from the severe New England weather. Because the framing was so substantial, it was visible in the finished rooms. The heavy braced frame continued to be used for all types of building from the first settlements until the 1850s in New England and even longer in agricultural buildings.

Seventeenth century houses are generally asymmetrical; size and placement of windows and doors follow no pattern. Roofs are steep and without an overhang. The chimney is massive, sometimes with decorated brickwork. In larger examples, the second floor may overhang the first by 6 to 18 inches, and the attic may overhang the second story a bit on the very largest houses. Doors, small by our standards, are composed of vertical boards on the exterior nailed to horizontal boards on the inside. Windows are casements, set in pairs or triples, glazed with diamond-shaped panes (quarels) set in lead strips (cames) and hinged with strips of wrought iron.

In the 18th century, the same house forms were continued, but houses tended to be a little larger with higher ceilings. Roofs became less steeply pitched, wall overhangs were eliminated, chimneys made plain, doors paneled, and double-hung sash replaced casement windows in both new and old houses. The lean-to continued to be built but as part of the initial construction, not an addition. 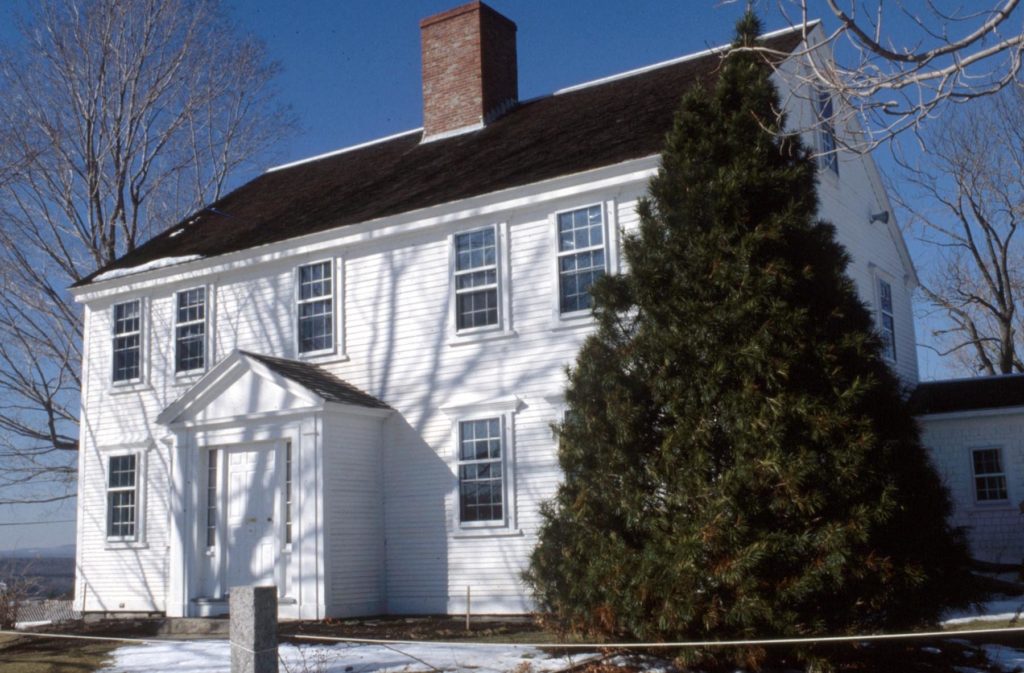 Windows and doors were placed in balanced patterns if not exact symmetry, giving evidence of an awareness of Georgian proportions even in the plainest buildings. Interior paneling is introduced, used on the fireplace wall, with plaster used on other walls above the chair rail, and later, on the ceilings.

Hover your cursor over the Slide show to pause, click back to see previous slide.