There is a block in the center of Amherst, Massachusetts that I zip by several times a day en route to my lace warehouse. Recently, while crawling behind a truck, I was able to linger over and appreciate the many different styles of houses in this single span.  I believe these are all owned by Amherst College, and while they are kept in excellent condition, my only wish is that they each could use a more period appropriate exterior paint scheme. 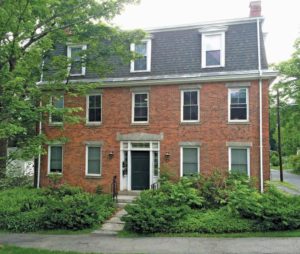 It’s an interesting building, mainly because it appears that it really wanted to be a Greek Revival; the granite lintel over the front door sports those neat little Neo-Classical end-flares and the sidelights and transom are the same as those found on late Federals and Greeks. The dormer windows are also embellished with Greek Revival pediments, leaving one to think that the architect had one foot firmly planted in 1830 and the other in 1850. Note: the sidelights and the windows are modern snap-ins, but at least the configuration of them is correct; I’ve seen far worse. 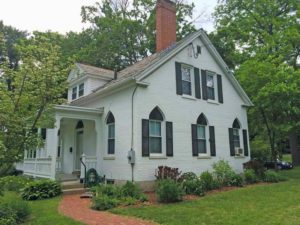 #2. The Gothic Cottage Next Door

It’s a little cutie, with lovely Gothic transoms covered with fitted shutters.  The entry porch and dormer are much later, around 1890 at the earliest. The roofline feels like a more vernacular 1850 structure, lacking the steeper pitch of a lot of Gothic cottages. Note: whoever is the first to apply paint to virgin brick facades should have someone slather a coat of latex on their tombstone in perpetuity. 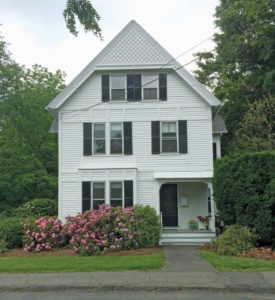 A quaint home with an inset portico and vestigial bay window, and lots of nice architectural details all dating from the 1880s. If there ever was an example of why white paint diminishes architectural ornament, this is it. All of the vertical and horizontal cross-banding blends in with the clapboards, to say nothing of the gable ornament. Just imagine this house with olive clapboards and russet trim and perhaps ochre highlights. 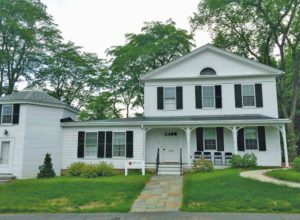 The main house is a typical, modest Greek Revival that could be found in any Northeastern town, notable only for its smooth, planked siding instead of clapboards and its Colonial Revival front porch.

Directly to the left, though, is a two-story octagonal outbuilding that is connected via a wing that may or may not be concurrent with the porch addition.  The octagon features the same planked siding and has minimal fenestration on its facade, making me to think this structure was originally a library or intended for some other function where interior wall space was required. Note: my musings are based on curbside thoughts and not research; it’s a rambling, not a thesis. 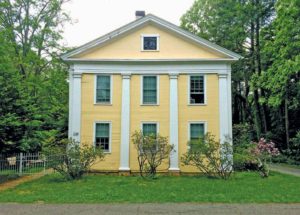 The sole example of color on the block (save for the brick Mansard), this house is a charming example with its four pilasters, solid architrave and planked siding (which emulated the honed stonework of the original Greek Temples). It should be observed how having the siding be a different color than the trim accentuates the architectural detail. The building has a side entrance, which is a little unusual, but not unheard of; perhaps because it’s not that large a house, and the interior layout of the rooms precluded the primary entrance being excluded from the facade. 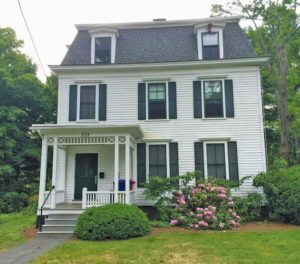 A solid member of the community; looks to be about 1850-60 with a front porch added at least a couple of decades later reflecting a late Stick Style influence.  Another example of how a paint scheme would reveal more of the detail, such as with the cornices, dormers and porch. 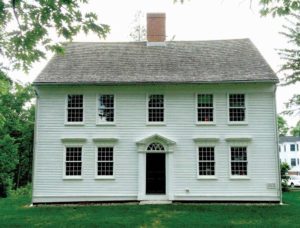 Recently restored, this 1795 beauty has wonderful Neo-Classical details on the cornice, lintels and especially the portico and fanlight. I love the large center chimney and hand-spilt roof; it’s a great example of the Federal style with little or no alteration. I know I’m obsessing about white paint (and have done so for my entire adult life) but just twenty minutes northwest of here is Historic Deerfield, and there are so many great Georgian and Federal houses with of authentic paint colors that enhance their appearance.

Dan Cooper is a well-known author, and has published over a thousand articles on the subjects of antiques, architecture, preservation and historic interior design. His first book, New Classic American Houses, was published by The Vendome Press.  Dan is also President and CEO of Cooper Lace, has designed and sold historic lace curtains for twenty four years, providing them to private homes, museums and film sets. Dan is recognized as a leading authority on the subject of historic carpeting.