It’s all Greek to me

It was linear; it was easy. But then you were at a fundraiser in the toney part of town (where they’re always there when they need you) and some guy who was mightily impressed with himself started bragging about his Georgian house across the Olde Towne Greene and you were thinking “The only George on the American side of things was Washington; wasn’t Jefferson the architect?”

It’s so confusing: What’s the difference between Colonial, Georgian, Regency, Federal, Greek Revival and Adam? Especially Adam, because they’re always dragging Adam into this with his ovals, fussy bits and stuff…and where does Bullfinch fit in? We wouldn’t know him from Adam…

Basically, it boils down to which country you want to use as a reference; England or America. The two countries remained historically and stylistically intertwined, with some indigenous variations, throughout the 18th and 19th centuries, but for the most part their roses merely had different names.

In Britain, the term “Georgian” refers to the 18th century, much the same as “Victorian” implies the last two-thirds of the 19th century. (There were three Georges during the former, and only one Victoria during the latter). America, as we all know, was a British Colony until the Revolution, hence the term Colonial, except if you’re a realtor, whereupon you apply this term to any house built before World War II.

Easy enough; but post-revolution America sought to create its own identity and modeled themselves after ancient Rome. This period of 1783-1815 is known as the Federal Period. Concurrently, at least roughly, in England, George IV was the Prince Regent, and then King followed briefly by William IV. This era is thought of as Regency. 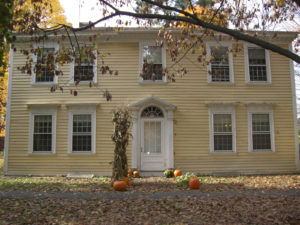 Then, from 1800-1837, English architecture is known as Regency, until Victoria ascended the throne. We still refer to most 19th century American structures as Victorian, not so much as a nod to Britain as to the revolving door of the American presidency, and the fact that saying that you lived in an 1850s Fillmorian seems pretty ludicrous.

That being said, referring to your American house as “Georgian” sort of smacks of Toreyism.

For both nations, the underlying influence to all of these styles was the architecture of Ancient Greece and Rome, sometimes with a little Egyptian or Etruscan thrown in for spice. Here’s the important thing: it looked to the past instead of the future. For a while, it seemed that every building, both public and private, was a rendition of My Big Fat Greek Temple.

There’s a little rhyme that was taught to this writer by an old house aficionado on how to identify a Georgian or Federal in this country; “Five, Four, and a Door” meaning that there was typically 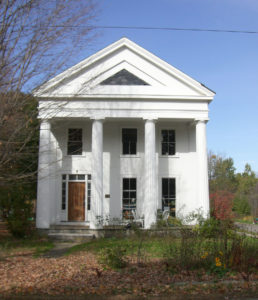 five windows across the façade of the second story, with a center door framed by two windows on either side.

Regency doesn’t show up too much in the States, we were too busy establishing ourselves as Federal; However, an exquisite example of English Regency style appears in Savannah, Georgia (of course) at the Owens-Thomas house.

The Hot-Shots In almost every Architectural style, there’s at least one Architect whose own interpretation of that style transcends that of his or her colleagues, an Elvis if you will, and creates a sub-style that is henceforth named after them. We often refer to “Wright’s Prairie Style” or “Richardsonian Romanesque”; so it is with the work of the Scotsman Robert Adam, a major proponent of Neo-Classicism. Adam’s work is known for it’s lavish colors and delicacy of detail. In America, Charles Bullfinch and Samuel McIntyre might be considered Adam’s American equivalents.

The Parallel Universe Both England and America delved deeply into the past, looking to Ancient Greece for inspiration. America also kept glancing over her shoulder to Europe, and especially England for guidance on matters of taste even as she forged her own way in the New World. Here’s a guide to the evolution of styles-the exact dates are flexible depending on with whom you’re speaking:

Our staff features writer, Dan Cooper has been working on old houses for over 20 years, and also writes for Old House Interiors, Period Homes, Cottages and Bungalows amongst other magazines on the subject of architecure, antiques and design.

The Choice is Yours: Paint for an Early Historic House