The previous owners of our house installed antique lightning rods along the rooflines. They are copper with really pretty cobalt glass balls about midway down. The system grounds to a big metal stake in my back garden. I recently asked my husband if I could just get rid of the stake since it gets in my way and he gave me the look (anyone who gets the look knows what I am talking about, it’s part pity and part “what are you stupid?”) and replied “only if you want them to be useless.” Oh, I thought they were just for looks. 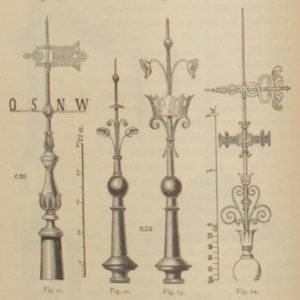 Back in the days when a fire would wipe out the family farm, lightning rods were a common sight, protecting tall structures from lightning strikes. They are still a good idea since lightning strikes cause an average of 8,500 structural fires annually, and today’s country settings are still very limited when it comes to controlling fire damage. Our town, for example, does not have one fire hydrant and depends on local streams to fill its one tank truck — not good odds for saving our house!

Lightning is unpredictable and chooses its targets completely randomly. Lightning rods do not attract lightning to them, but rather work by directing lightning’s massive electricity safely to ground once struck. Lightning is seeking ground and looks for the path of least resistance to get it there. Any structure in its direct path will get struck first; consequently taller structures (houses and trees) get hit more frequently than low structures (cars and people).

A lightning rod system is an excellent conductor and offers a path to a direct or “jumping” lightning strike, allowing the current to flow to ground without causing any heat damage. Because it is not a good conductor, a material like wood can be severely damaged in the process of resisting the electrical surge. The lightning rod, first discovered by Benjamin Franklin, is very simple – it’s a pointed metal rod attached to the roof of a building. These lightning “arresters” should be made of a conductive metal, usually ½ inch to 1inch diameter copper, and installed along the highest points of a building. Spaced at designated intervals, usually three to four are necessary on a larger building to be sure that the current keeps flowing easily. Rods are connected to one another by copper or aluminum cables forming a grid and directing a path to ground. This path ends at a stake or ground rod (preferable not in your tomatoes) nearby where the electrical surge can die a safe “death”.

Cables forming the grid should also be substantial, ½ inch to 1 inch typically. If it is too skimpy it will melt, and then the only path to ground from the lightning rod will be the structure you are trying to protect. Cable is used, instead of wire, because of the large current that will have to pass to ground if the lightning rod is struck. Since the purpose of the system is to make the path to ground as easy as possible, it stands to reason that the larger the cable, the better. Separate structural elements such as chimneys and roof cupolas, as well as television antennas, substantial roof flashing, copper gutters and the like should also be protected with lightning arresters.