The Arts and Crafts movement inspired the Craftsman style house, which includes the bungalow, the American Foursquare, Prairie and Mission in its lexicon.

The Arts and Crafts movement, begun in England in the last third of the 19th century under the influence of William Morris, touched all the decorative arts and styles in its day. It was dedicated to a return to the pre-industrial age of handcrafted objects, simpler forms, and natural materials. Objects were characterized by plain and substantial surfaces, warm, muted colors, handcrafted elements such as leaded glass, hand forged hinges and handles and use of decorative patterns drawn from nature. It was a reaction against industrialized mass production and repetitive patterns which were replaced by custom made details. Historical design elements were not used. 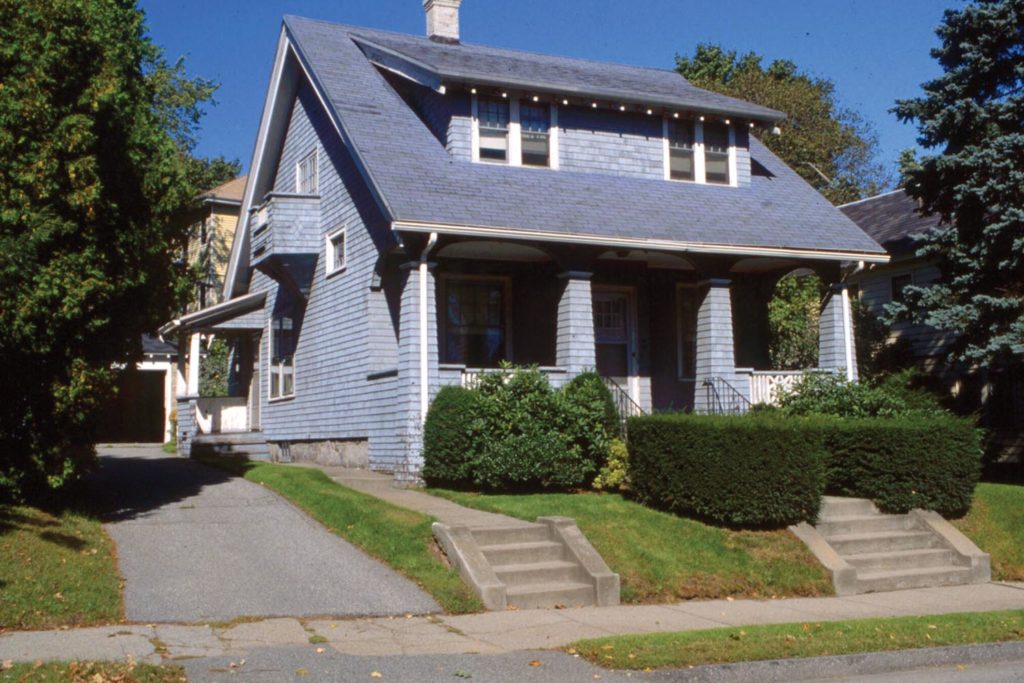 In American domestic architecture, the new style came to be known as Craftsman, or Arts and Crafts, and the most popular interpretation was the Bungalow. These were small, usually one and a half stories under a broad sweeping roof resting on squat porch posts. The roof overhung on all sides and the eaves were often supported by undecorated brackets or showed exposed rafter ends. The roof was usually fronted with a large gable or shed dormer. The emphasis was on the horizontal; the porch was placed under the roof, wall surfaces were plain – shingles or stucco was preferred – with large windows, and chimneys were kept short.

Floor plans were open, focused on a large family room with a fireplace sometimes enclosed by a cozy inglenook. Because houses were small, built-in sideboards and cabinets conserved space, surrounded by dark wood paneling. Lighting was subdued – this was the age of Tiffany lamps. First floor sleeping porches were often included.

Craftsman influences were seen in other styles of the time that were not bungalows. Often, homes that were distinctly Tudor on the exterior were given a Craftsman interior treatment. Or a bungalow may be seen with Tudor half-timbering on the exterior. But it was the American Foursquare that deserves special notice because of its great popularity in this period.

The Foursquare was a two story house with a hip roof and dormers, wide eaves without brackets, and an attached front porch, the whole resting on a foundation of stone or early rough-faced concrete block. Craftsman influences were seen in the absence of historical detailing, plain walls, wide windows, and an open interior finished with plain, unpainted wood trim. The plain and geometric shape of the Foursquare with its wide roof can be traced to the early work of Frank Lloyd Wright. Because the Colonial Revival was also popular in this time, some Foursquares can be seen finished with classically derived trim and window treatments.

Other interpretations of Craftsman can be found everywhere across America. While the bungalow, Foursquare, and Tudor are most frequently seen in New England, other styles predominate in other regions of the country. The mission style, very compatible with Craftsman design, is favored in the west along with prairie-style variations in the Midwest. Resorts and seasonal housing of this time were sometimes constructed on log cabin motifs or even as Swiss chalets, but the Craftsman themes are always recognizable.