A unique revival style of architecture of the Victorian period that is distinguished by characteristics such as a low profile or flat roof, wide bracketed eaves large windows and usually a large porch.

In New England the Italianate style house is usually of wood, although brick and stone examples can be found. Three types are most frequently seen: the traditional two story, five bay centered entrance house with a gabled roof parallel to the street to which a veranda has been added across the front; the nearly square two story three bay house with very wide eves supported on brackets and with a flat roof; and the villa form composed of several interlocking blocks grouped around an off-center square tower.

All these variations will have the wide bracketed eaves, low pitched roofs, large windows, sometimes set in pairs with ornamental caps, and long one story porches with sawn decorative fretwork on the front. Bay windows are common as are two panel entrance doors.

Although these houses are wood frame, they are not built with heavy posts and beams as most buildings were before the Civil War. Lighter “balloon framing: is used, allowing much more complex floor plans and roof patterns for this and all the subsequent domestic styles.

Ornamentation is drawn from Classical sources generally, but not consistently. Quoins are often seen at the corners of exterior walls, but Romanesque and other styles are also used. Exterior colors may vary from white to pastels to earth tones. Trim is not usually picked out with separate colors. 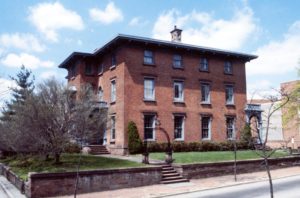 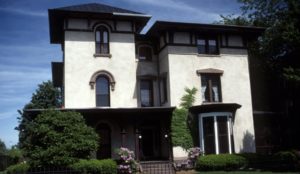 The style is relatively common, and, with Gothic Revival, initiated the interest – for those who could afford it – in living outside of cities on carefully landscaped estates.