The Shingle Style is one of the variations to come out of the Victorian era, with a completely asymmetrical plan similar to that of the Queen Anne Style. The exterior detailing typically completed in wood shingles, added a touch of whimsy exploring and celebrating the natural beauty of wood through applied decoration.

Shingle Style houses are massive and roomy, relatively plain on the exterior without roof overhangs or applied decoration, and, of course, covered in natural wood shingles which darken with age.

Some Shingle Style homes have a first floor exterior of rough stone or brick with a variety of shingle patterns used on the wood-frame upper floors. Porches are often set into the facade rather than attached externally. The plan and elevations are asymmetrical and the roof is prominent, seeming to arch over the whole. 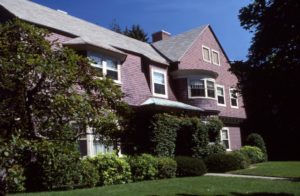 Chimneys are large and visible. Doors and windows are large, plain and finished naturally. The texture of the shingle surface serves in lieu of applied ornamentation to give visual interest. Shingles are also used to cover sweeping curves of bay windows and porches, surfaces which are unsuitable for conventional clapboarding. Decoration drawn from historical sources is limited to an occasional element taken from colonial sources such as a Palladian window.

The Shingle Style was first used by Henry Hobson Richardson in 1880 to express the spirit of his unique Romanesque stone architecture in wood frame dwellings. It was adapted by his former students, Charles McKim and Stanford White, for large resort homes; the natural colors and informal compositions evoked the rambling and decaying appearance of early colonial houses of the Northeastern seacoast which McKim and White had seen on a tour of old New England villages in 1877.