A Millennial’s View: Growing Up during an Old House Restoration

When I was 8, my parents moved into an 18th century farmhouse.  It’s one that we still live in now, although it doesn’t look like the same house after twelve years of restoration projects.  What was once an old, rundown farmhouse has become an elegant and sturdy home.  The transformative process took place over the span of 12 years, and I’ve slowly been learning to appreciate what it means to live in an old house.

Being a family member living in an antique home shaped my childhood in a  unique way.  I spent hours wandering the cement floors of Home Depot, admiring the high shelves full of unknown tools and materials.

My older brother and I used to play hide and seek during the longer visits.  I’ve put walls up and torn them down, in varying orders.  My dad spent much of his “free” time working on the house, so my time spent with him was almost exclusively through working on the house and other similar projects.   I’m used to the smell of fresh paint and old wood; I spent some time putting one over the other, handling paint rollers and messy cans half full of primer.  I’ve learned to walk on creaky floors, feet barely grazing the unfinished hardwood boards that shifted with every step.  I’ve learned to sleep through the sounds an old house makes; winds catching in the nooks and crannies, animals scurrying through the walls, debris settling in the pipes of the wood stove.  It’s these small things that come to mind when I think about home.

As I grew up in the house, I would try to hide from the responsibility of work projects.  My dad would call on me for help every now and then, so I would try to remain absent by hanging out in one of the many different rooms.  The idea of living in a house that still needed work seemed ridiculous to me; why would anyone live in an unfinished house?  Surely if we didn’t have a bathroom door, (merely a curtain) we shouldn’t be here.  We should be living where the house isn’t a part time job.

These were my thoughts during my time up until high school.  I slowly began to accept that the house was just something that needed attention every now and then, like an old family pet that occasionally was on the mend from one ailment or another.  I didn’t pay any attention to the work on the house unless I was summoned, lending as few hands as possible for each project.  I would stand behind my dad, while he worked, with one foot out the door.

As the house progressed, the projects changed.  It became less construction and additions, more minor alterations and maintenance.  I realized that no matter how “done” the house was, it would always need work.  Something fell off where it should be attached, some hideaway area needed to finally be cleaned out, and a thing stopped working six months ago and “it’s about time we get to it”.  There was never an end to the list of responsibilities for the house. 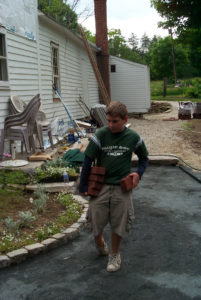 When I moved away to go to college I felt relieved, no longer having to deal with the  seemingly nonstop tasks that the house seemed to generate.  I figured I could shirk my way out of responsibilities when I was home on breaks, and I wouldn’t have to deal with any of it.  And for a while, I didn’t think about it; I had other things on my mind, like getting settled in college.  It wasn’t until I was able to separate myself from my home that I was able to realize what each individual project had been doing for me as a collective whole.

After coming back to the house on breaks, I began to understand and appreciate the transformative process that comes with living in an antique house.  Returning home after being away at college for an extended period of time, the house seemed more finished than it had ever been.  It felt like a different place than where I had fled from.  As I continue to come home from school, I realize it is my outlook on the house that has changed.

Even the most pristine old houses will need work, and with that work comes the ability to create something new- some kind of vision that comes from within- that makes the house more like your own, while respecting the past.  In a greater sense, living in an old house has taught me that having ownership gives the ability to take control and create a personal vision.  By doing something with your own hands, there’s suddenly a way to carefully add to a long piece of history.

When we have guests that have never been to the house, I sometimes find myself leading them on a tour, explaining the history that the house holds for me.  “Here’s the patio that my brother and I helped make.”  “This is the floor I nailed in with my dad.”  “This front door took me and a dozen other people to lift into place.”  When I bring my own friends over too, I show them around the house with a sense of pride that I had never felt until I returned from college.

I may not yet be able to fully appreciate the antiquity of an old property, but I’ve come to understand and value what it means to live in an antique home.

Thomas Petraglia is the son of the publisher. When he wrote this he was a junior attending the University of Connecticut and studying Psychology and Human Development. Now at grad school, he looks forward to having his own home one day, and conscripting his father… and his father’s tools.