One could spend their entire life in the Pioneer Valley and never happen upon Suffield, Connecticut, unless they suddenly needed an alternate route to Bradley Airport due to a traffic jam on I-91 in Springfield.  And yet, there, tucked into the verdant corridor just west of the Interstate, awaits a long, grassy mall lined on both sides by a vast number of fine examples of American residential architecture dating from the late 18th, 19th and early 20th centuries. I’ve listed the following, which are a mere representation, in a vaguely chronological order. 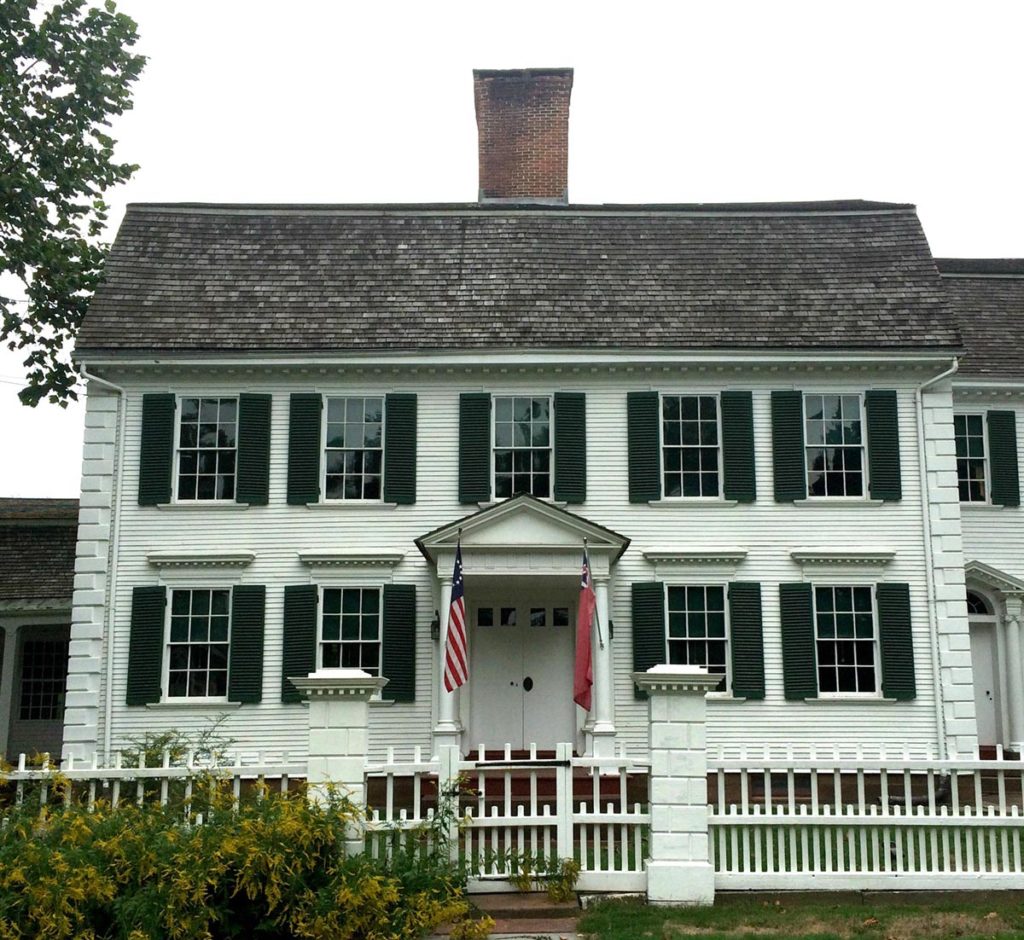 1. The Phelps-Hatheway House: Situated in the center between the North and South Greens, this house museum is a fantastic example of Georgian Architecture.  The estate still has its outbuildings, including a barn and visitor center, but more importantly, its orangery (or at least it looks like an orangery). The original house was built in the 1760s, with an 1794 addition. A side note: while this column limits itself to what can be seen from the street, Phelps Hathaway should be visited for an interior tour, as it possesses the largest collection of original 1802 wallpapers still in situ, along with reproduction Wilton carpets (for which I consulted). 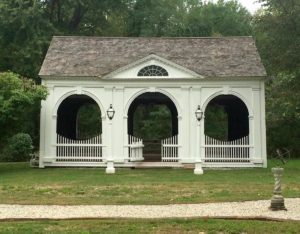 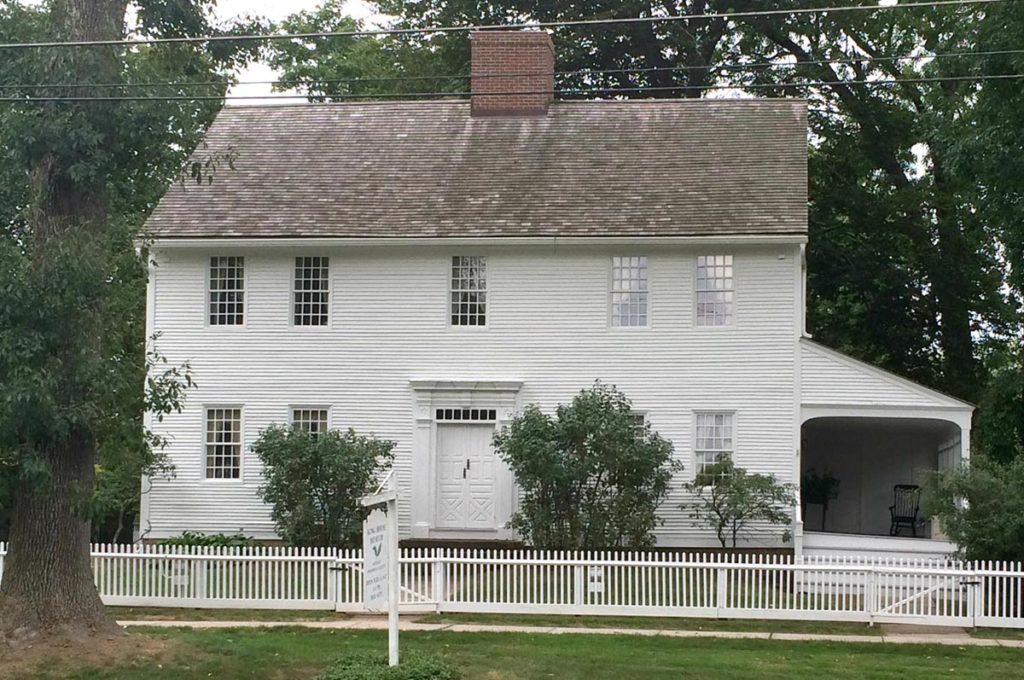 3. The Center-Chimneyed Georgian:  This one is just a great textbook version, right down to the slightly under-sized windows and cross bucked doors framed with a solid, heavily molded Georgian surround. The side porch is an obvious, but charming addition. 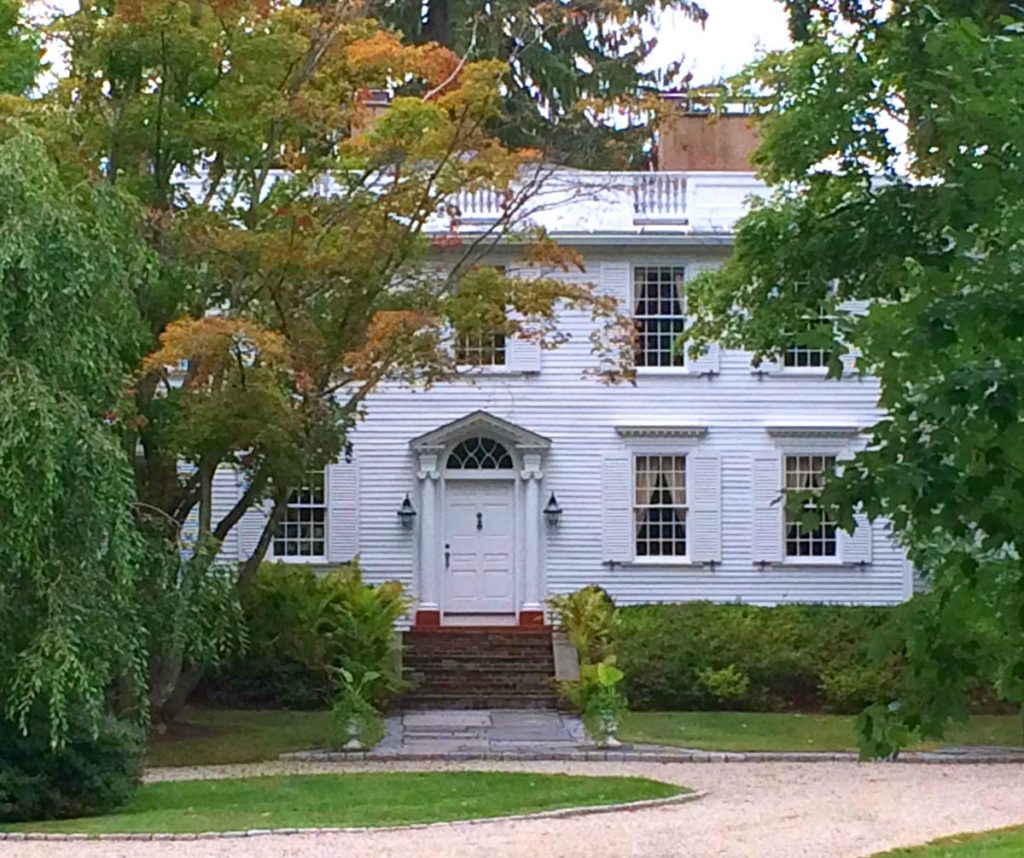 4. The Federal with Gallery:  The plaque on this one dates it at 1795. This is  as close as I could get without trespassing, and the most distinctive parts of the house are the  balusters and panels on the gallery, which create a grander impression than your typical two-story house and the lovely ionic-columned portico and fanlight.  The white shutters are a little, er, unusual. 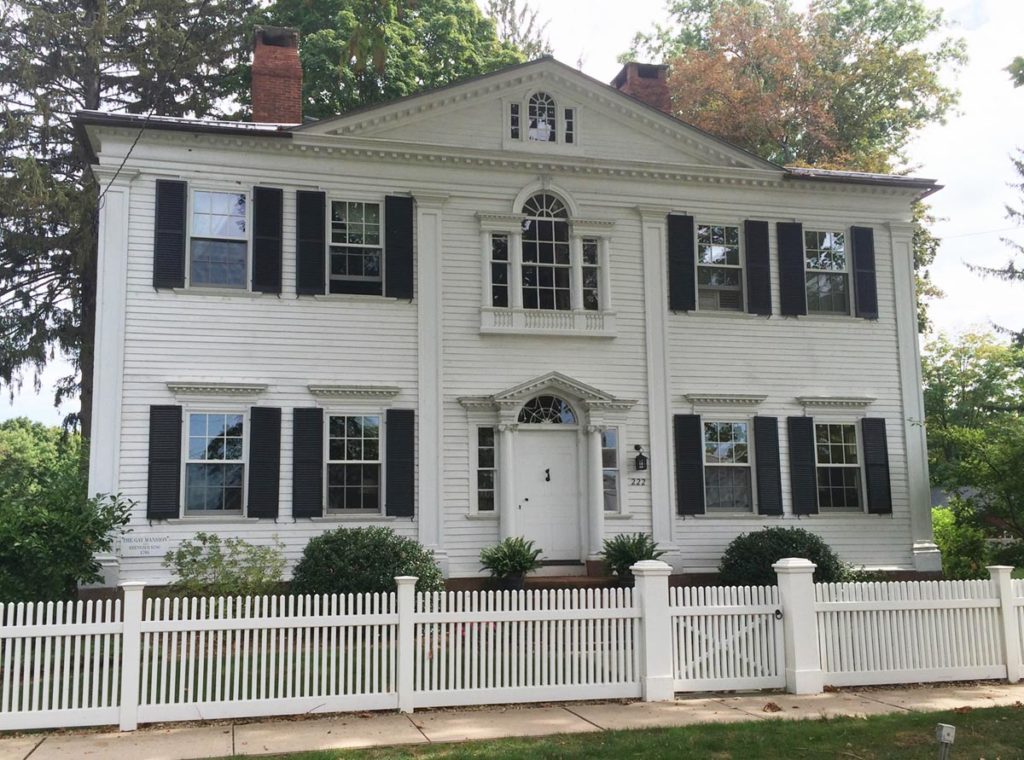 5. The Fancy Federal:  Four pilasters partition off the banks of  windows and doorway, which are all enhanced with dentil-moulded lintels. On top of that, there are not one, but two Palladian windows and a dentil molded dormer. Note the three story’s worth of sidelights as well. 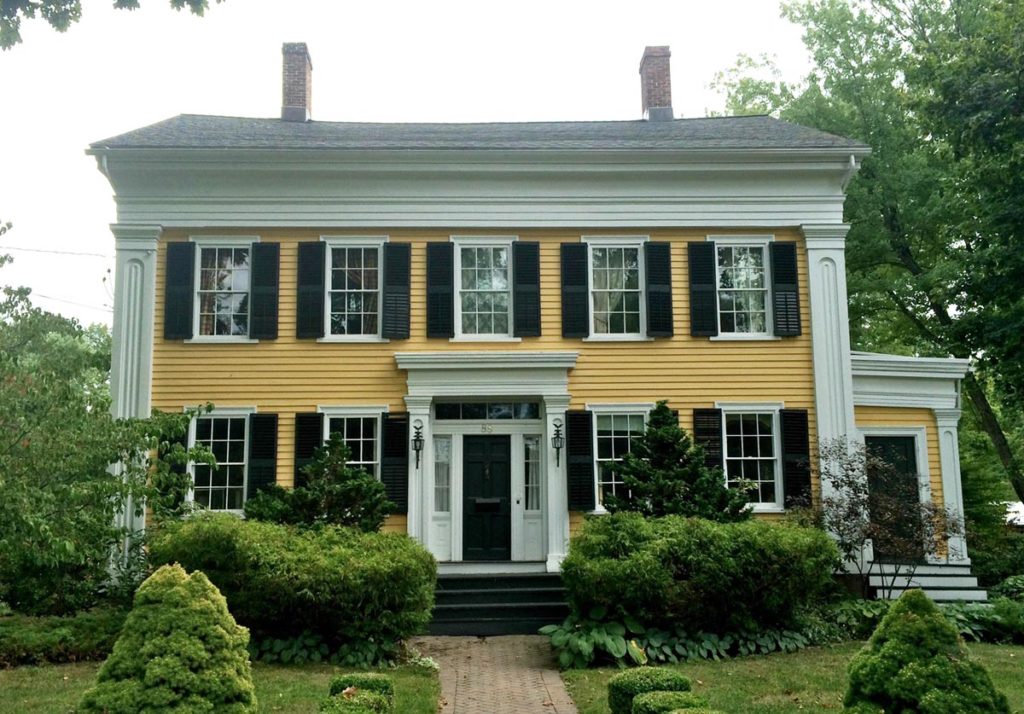 6. My Big, Fat Greek Georgian:  Almost all Greek revivals have front-facing gables, which emulated Grecian temples. You know, columns, architraves, friezes…  This house sports very fancy quoins/pilasters, and an inset portico, all full embellished with Greek revival designs, but the entry door is on the long side of the building, and the array of the windows is decidedly Georgian/Federal.  Was this originally built in the late 18th century and stylishly updated a couple of decades later? 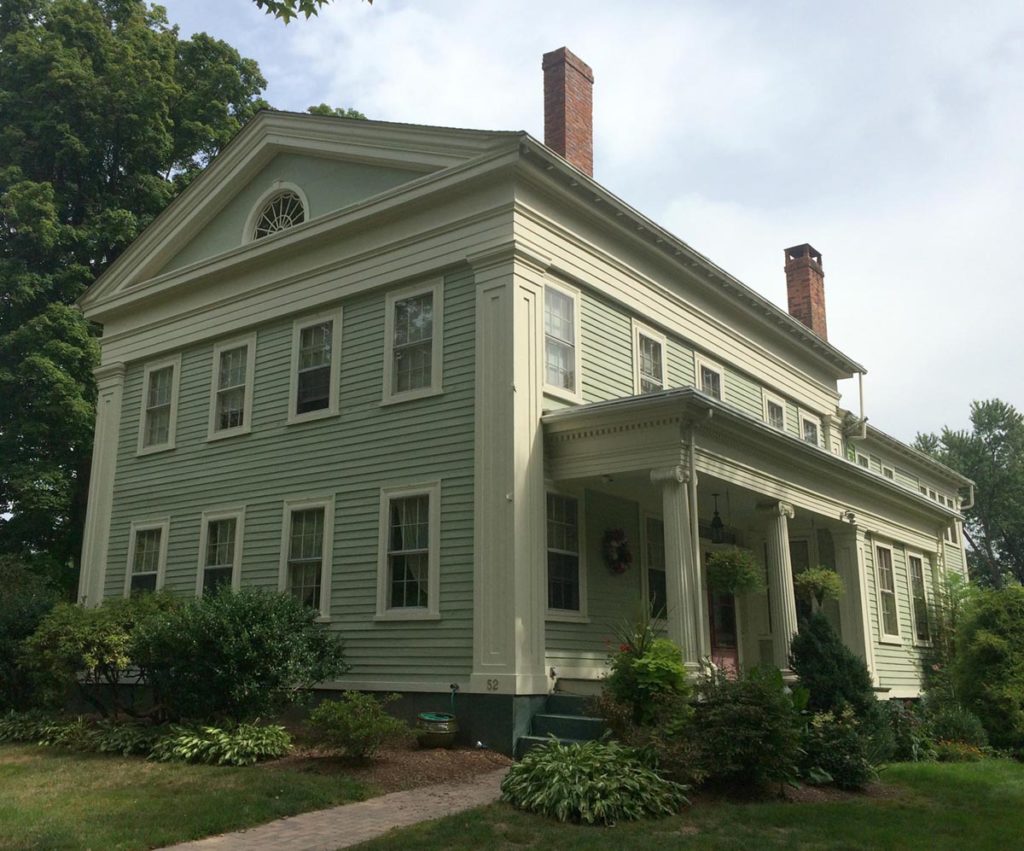 7. The Greek Salad with a Side of Porch:  Here’s another quirky Greek Revival; the gable faces the street, as it should, and the roof pitch looks appropriate, but it’s got a side entrance and a fairly substantial porch with Ionic columns.  Was this also updated? The long side has the “five over four windows, and a door” although they aren’t quite symmetrical; there’s a story here as well… 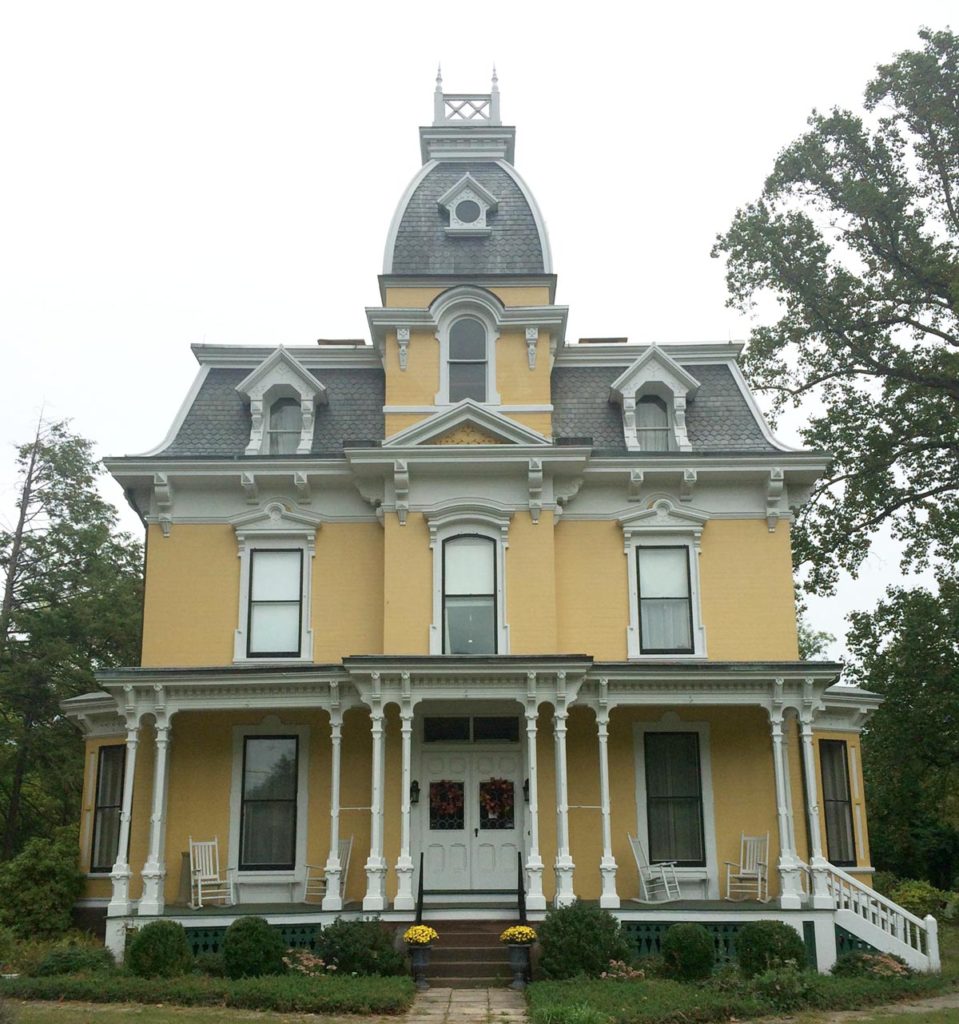 8. The Addams Family:  These were the first old houses I loved (at age six) and they are still my favorites. Every town has one, and it has usually been converted into a funeral home.  The slate-roofed convex Mansard tower is wonderful, and the ornamentation on the windows and full-width porch make this a top-notch example of the Second Empire style.

9. The Sticky Tuscan:  I adore hybrids; they make you appreciate the nuances of each style while at the same time, enjoy the uniqueness of the individual example. This house is a fine 1850s style  Tuscan revival with an asymmetrical massing, tall squared tower (aka campanile), and round-head windows, but it appears to have been augmented with angular Stick Style brackets, corbels and gable ornaments. 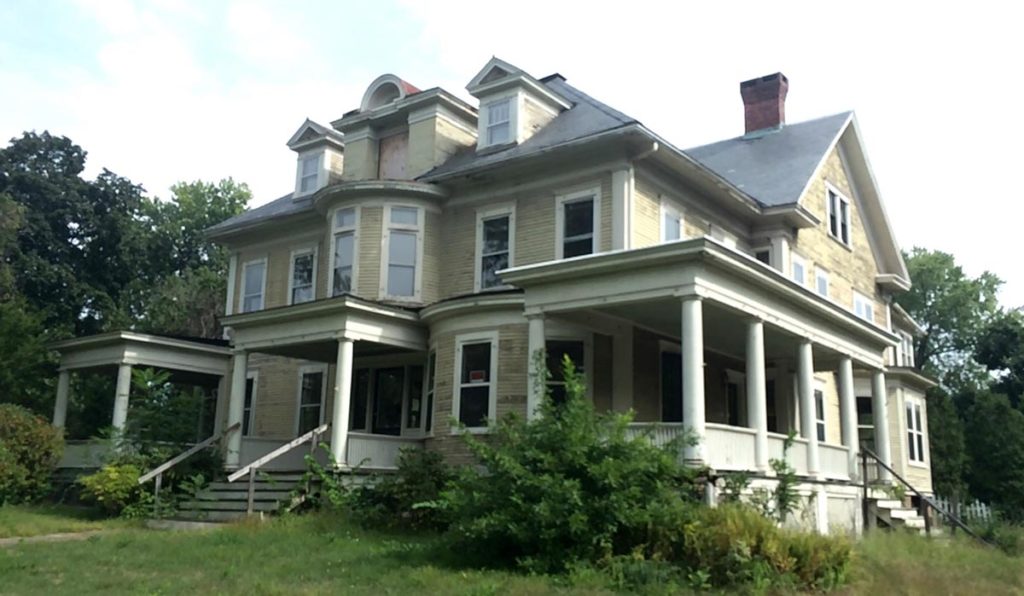 10. Colonial Revival Porches, House Included:  This circa 1900 Four-Square is framed by three sprawling, columned porches, and has bow windows on the first and second floor, along with a Palladian inspired dormer in the center of the roof. But wait a minute; the wing off of the back, with the side-facing gable seems out of place; is that the original structure from the late 19th century, and this is all a massive addition? I wouldn’t bet against it, as the transition between the two sections is a little abrupt, and considering the amount of detail on the front section, if it had all been built at once, it might have been a bit more graceful.

Dan Cooper is a well-known author, and has published over a thousand articles on the subjects of antiques, architecture, preservation and historic interior design. His first book, New Classic American Houses, was published by The Vendome Press. Dan is also President and CEO of Cooper Lace, has designed and sold historic lace curtains for twenty four years, providing them to private homes, museums and film sets. Dan is recognized as a leading authority on the subject of historic carpeting.