When Mark Landry was renovating his circa-1830 Greek Revival farmhouse in Medway, Massachusetts, he noted something interesting: a dovecote, or dove house, on the gable of the attached barn echoed the style of the main house’s second-floor porch, right down to the Doric column. 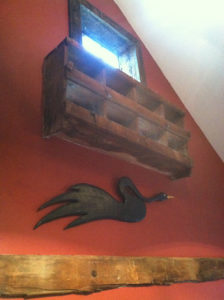 Inside the barn, refashioned to serve as office and family room, eight nesting boxes may be seen on the wall, once the interior roost for the birds who entered via the eight holes outside. Mr. Landry has placed Plexiglas over the holes, so today’s feathered friends won’t take up residence in what is now a quaint architectural vestige.

Dovecotes and swallow holes are common features of old New England barns. Thomas Durant Visser’s Field Guide to New England Barns and Farm Buildings quotes a Groton, Connecticut, farmer writing in 1855:  In barns built after the old style, “swallow holes” were always to be seen. In some of these barns I have counted twenty nests at one time, all of them being occupied. A barn swarming with a multitude of such happy, innocent inhabitants, resounds with such flutterings, twitterings and gushing outbursts of song, that it seems as if every one who enters within its precincts, even if he be a confirmed hypochondriac, must forget all his troubles, and feel his heart drawn upwards to praise Him “to whom praise alone praise is due,” for their cheerful melodies…And, besides the pleasure we receive from their society, they, and especially the swallows, destroy during their short stay with us an innumerable multitude of insects, which is a fact of no little importance in these insectivorous times.

The arrival of the swallows was a sign of spring. In Birds of Massachusetts and Other New England States (1929), Edward Howe Forbush writes: 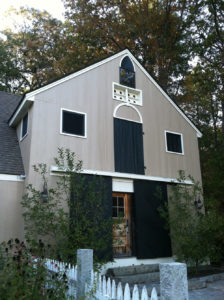 If, when the Swallows arrive, they find the building closed in which they are accustomed to breed, they sometimes approach the house and fly about it, or about any inmate who appears, twittering and calling until someone takes pity on them and opens a door or window, when they immediately enter, showing their gratification by happy excited twittering. Many farmers cut a small hole in a barn gable to accommodate the birds.

At Pantry Brook Farm in Sudbury, Massachusetts, where Sam Zeigler and his team from SZ Restoration Carpentry are restoring 18th- and 19th-century buildings on the historic 100-acre farm, a 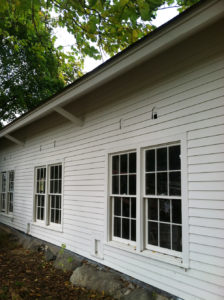 circa-1820 barn has six swallow holes in its gable. Inside the vast barn, Mr. Zeigler pointed to the boxes opposite the holes high up the wall. “It’s a little attic for them to live in,” he said.

But the barn isn’t the only structure at the farm with built-in bird accommodations. A long chicken-house, dating to the early 1900s, has a row of what appear to be swallow or dovecote holes opening to its attic. If the chickens resided on the first floor, did wild birds nest upstairs? “It’s a mixed-use development here,” said Mr. Zeigler, of Norfolk, Massachusetts.

Mr. Zeigler recently took part in the restoration of the circa-1790 Ebenezer Singletary house and attached 19th-century barn in Hopkinton, Massachusetts. Atop the Hopkinton barn are two dovecotes in the form of cupolas. Mr. Zeigler uncovered the cupolas’ original purpose when he peeled away clapboard to reveal the swallow holes. “They’re multi-family birdhouses,” he said.

Swallows are regular visitors, nesting under the clapboards, and if the barn doors are left open, flying inside, said homeowner Merylyn Mezitt. “Every spring they come in the barn,” she said. Other birds frequenting the grounds include robins, woodpeckers and bluebirds — though the swallows tend to chase the bluebirds from their boxes, she said.

Meantime, chimney swifts have taken to nesting in the main chimney of their house. “They come in the spring and make noise — cheep, cheep, cheep — and live there all summer long,” Mrs. Mezitt said.

She and her husband, Roger, both past presidents of the Hopkinton Historical Society, have spent more than 20 years restoring the saltbox-style Singletary house — once the town’s poor house — 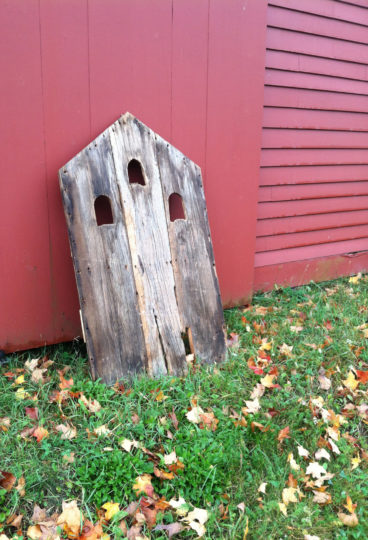 and adjoining buildings on 50 acres of farmland once part of Weston Nurseries, founded by Mr. Mezitt’s family.

Mr. Mezitt recalled growing up on a farm and the part swallows and other field birds played. “The birds were for the barns,” he said. “They wanted them around, like the cats — every farm would have a barn cat or two or three.” With the birds eating the bugs, he said, “you never got a mosquito bite.”

He showed a visitor a piece of wood with holes in it that was the original fronting of one of the barn cupolas, and that was used as a template for a replacement dovecote.

Now that the swallow holes have been uncovered on the cupolas, perhaps the swallows will return to nesting there, Mrs. Mezitt said. “We’re hoping they would.” 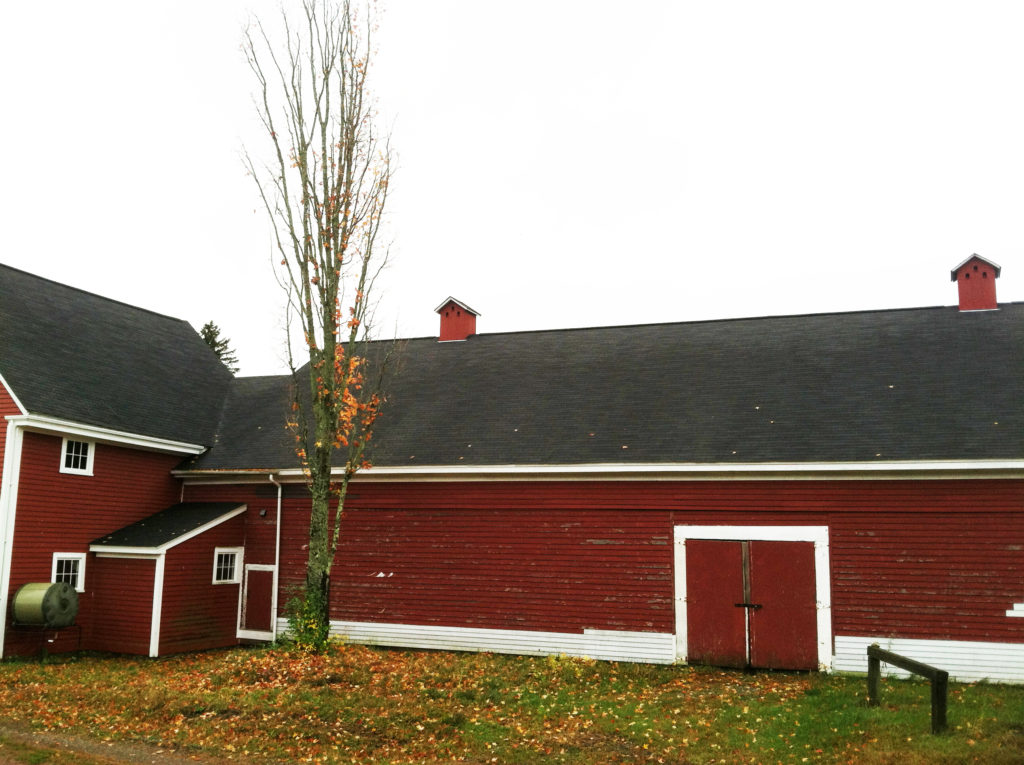