A Q&A with Sally Zimmerman

A dominant presence in urban neighborhoods across New England, the three-family or triple-decker is the regions iconic multi-family housing type. Why did we stop building them? Sally Zimmerman, senior historic preservation manager at Historic New England, gave an illustrated lecture on the topic August 9 at the Harrison Gray Otis House on Beacon Hill. She explored the origins and design of triple-deckers, the push to ban them in the early 20th century, and their place in the social and architectural history of New Englands urban landscape. She has written previously on the subject for her organizations publication, Historic New England. Ms. Zimmerman spoke recently with Antique Homes about the three-deckers place in the architectural history of the region.

A. What people still recognize as a virtue of these buildings is their affordability. While they were definitely built in clusters, they were not necessarily the first choice in subdivisions. Often they came at the end of a subdivision where there was a little leftover land. They were opportunistic for their time and for those who could jump on the chance to purchase and live in one. If you could afford to purchase one it came with two rental units. That made it possible to have extended family or to get sufficient income to pay for the mortgage. So they were really appealing.
We think of them now as more working-class house. Then, they represented a step up from working-class housing because they were pretty accommodating. They had good space: whole families were living in these, not just one young urban professional. They had all the amenities of middle-class life: they had working bathrooms, with toilets, sinks and tubs; they had working kitchens; they had living room and dining room; they had two bedrooms; they had closets. In many ways they reflected the middle-class ideal for that time. Much better than a tenement.

Q. Why did they stop being built?

A. They were a little bit tarred with the tenement brush. There was a range of them, from more substantial to less substantial or more cookie-cutter. They began to get a bad reputation from when the Progressive planners, the city planning profession grew up in the early 20th century and zoning began to be imposed in cities and towns. They clearly are way more dense than most zoning would allow now. That was essentially what started their downfall, the beginning of the regulations on setbacks and density and height.
When they were cheaply built, they deteriorated relatively rapidly — the trim fell off, they did not get painted. If they were built very close together, there was some concern about fire. They were kind of seen as a blighting influence on a more suburban ideal. They were at the edge of that urban-suburban line and they clearly cross over into the more urban side.
What the early 20th-century planners hoped was the two-family house would be the alternative, that it would give the same kind of opportunity to pay for a mortgage from rental income from a second unit, but that it would be more in scale with the surroundings. Its probably not all that dissimilar from the tension between big giant McMansions now and more traditionally-scaled housing. 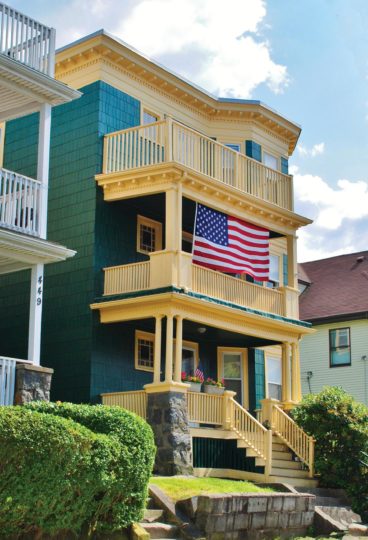 Q. Have three-deckers undergone a renaissance?

A. The reason theyre not built now is theyre wildly over the density allowed for the size of the lot. They basically were legislated out of existence in the 1920s and 30s. The resurgence I think comes from the development of the legal mechanism for condominiums in the 1980s. We owned a condominium once that was one of the earliest condominiums in Massachusetts. It had like a 200-page master deed because it was so new nobody really knew how they would work and they were trying to write out every contingency. But now condominiums are a totally accepted form of ownership. In a lot of ways its the condominium that saves the three-decker, brings it back, makes it more middle-class again.

Q. What cities come to mind when you think of triple-deckers?

A. Amazing concentrations in Worcester (which) has put some of them on the National Register. Other ones are in Providence and Rhode Island. Obviously Boston — Dorchester, Roxbury, South Boston.

Q. Are there some preservation tips you would offer a reader thinking of buying a three-family?

A. They are fairly simple structures. Its not incredibly challenging to make them more energy efficient. One tip is, make sure to keep your roof in good condition, and make sure that the roof drains. The flat-roof ones often were built with a central drain, with the pitch toward the central drain. You have to make sure that it is kept clean, because you really get nailed if that does not happen.
Painting them can be a real challenge because they are so big. Most of the ornament is at the roof line and the porches. Sometimes you can include aluminum siding on the side and the back walls, and focus on the detailing at the front, on preserving the facade.

Q. Have you ever lived in a three-family?

A. I have. I lived in a three-decker in Cambridge, on Arcadia Street near Porter Square, that was built around 1910 or 1915. It was a relatively late one, and I will say, the tolerances were to the inch, so things fitted together veeeery closely. There was no extra space. I remember one of the stairwells, when it went upstairs, the middle-unit door just cleared (the stairs). It was very snug.

Q. Do you look back on the place with fondness?

A. Oh, yeah, definitely. This is something that developed here. It is absolutely typical of this region and not something that you see in other places. Other places its more the row house — Philadelphia, Baltimore, the row house really defines those areas. The three-decker, as they say, is a New England icon.

The Houses Taught Me